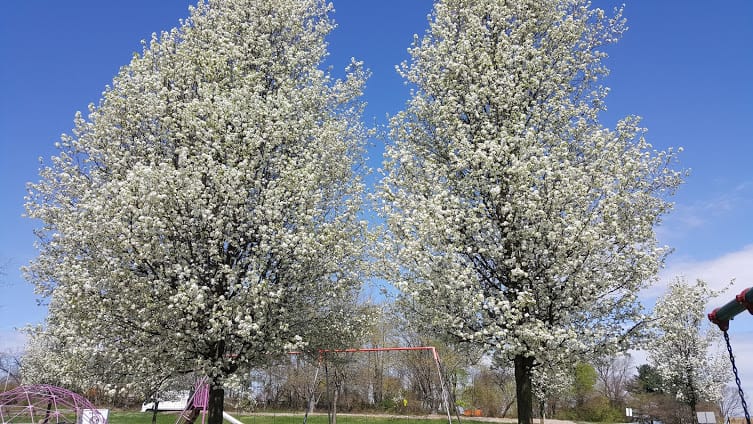 Every April on my drive home from work, most trees still haven’t budded out.  But at the same time I do see many other trees that are covered in white flowers.  I see them in the edge of forests and wild areas.  I see them in ditches and drainage areas, along fence lines.

And I see them in nearly every subdivision.

These white flowered weeds are commonly known as the “Bradford Pear” (Pyrus calleryana).  They were introduced by landscape designers in the 1960’s, and often used in urban landscaping.  Planting them along streets, and residential landscapers also sold them to new home buyers as a flowering tree.

The Callery Pear Tree is very harmful in the following ways

Now I will go into more detail to each of these bullet points to expand upon them, and provide you the detailed reasoning as to why you should not use this tree in your landscaping.

Why has Callery Pear Trees become so prolific?

Well, they are a flowering tree.  Beautiful flowers.  A Bradford Pear tree in full bloom looks gorgeous.  It also looks a bit strange though, as pretty much all other trees have no leave or even buds while the Bradford Pear Tree is a tall bastion of white blooms.

These trees can tolerate almost any environmental conditions and grow very fast, reaching 15′ (5m) in just 5 years or so.  With a max height of roughly 30′ (10m).  Also, they have a nice round or egg-like shape to them, which can be attractive for residential yards and landscaping.

The first Callery Pears were imported into California in the early 1900’s.  Seeds were brought in to determine if a suitable cultivar could be developed that would be resistant to Fire Blight, that was decimating the pear crop of California.  These seeds came from a variety of trees in China, giving it a large amount of genetic diversity.

In the 1960’s, a cultivar known as the Bradford was developed (in Maryland).  The Bradford Pear trees were initially planted/sold with the promise of them being ‘sterile’.  So people planted these trees thinking they would not reproduce.  But nurseries have been making their own cultivars for some time, cross pollination regularly occurs.  However, it has been shown (and I observe it each Spring) that the trees can cross-pollinate with other species.  Meaning these small little pears that are produced in the fall, are actually viable seeds.  Well, the birds will eventually eat them and spread the seeds in a natural way, leading to many new saplings in the Spring.

Grafted varieties can revert to the mother species

Trees that are grafted with ‘hybridized’, sterile varieties may produce the ‘sterile’ fruits.  Those fruits will become viable seeds through cross pollination.  Since these are hybrids, these seeds will produce one of two things – the original Callery Pear tree from China, or what ever it cross pollinated with.  The true Callery Pear from China is even worse than these ‘Bradford’ varieties.  The Chinese Native version produces thorns that can get up to 4″ long, similar to a Honey Locust.  These thorns can injure people, animals, and puncture tires.  Additionally they can form dense thickets, and make land less desirable for people AND wildlife.

An invader from another land

The main reason this tree blooms before Oaks and Maples have full buds is because it isn’t from North America.  The Bradford Pear tree is native to China, and has evolved in a completely different ecosystem.  So it doesn’t take many warm days after winter before the tree ‘wakes’ up from its Winter slumber and thinks it is time to put leaves out.

These trees are extremely adaptable.  They can grow just fine in moist conditions, drought, sandy soil, clay – and a large range of ph levels.

Why is leafing out early a problem?

The Bradford Pear tree going into full foliage so early in Spring causes problems for other native species.  The shade created from the flowers, and then soon followed by the leaves takes the sunlight away from the other plants on the forest floor, and other trees that are smaller.  This is a large issue for our native trees.  Now, it doesn’t effect native trees that are taller than the fast growing Bradford Pears, but it does reduce the growth rate of native saplings.

The longer that Oak, Maple, and other native trees are small saplings, the more prone they are to being browsed/eaten by deer.  So, it becomes difficult for a piece of land to grow the normal species that have evolved within our ecosystem.  Sure, the deer must get some nutrition from eating a young oak sapling.  But they would get more food in the long run if that Oak sapling was able to grow to maturity and produce acorns!  Too bad we can’t make the deer understand that fact.

Not just a problem for other native trees

The sunlight ‘stolen’ by the earlier-than-native foliage of the Bradford Pear tree effects our woodland wildflower population.  Virginia Bluebells, Spring Beauty, Trout Lily, Blood Root – all early Spring woodland wildflowers.  These flowers are a valuable source of nectar to bees and other native pollinators.

Early Spring woodland flowers emerge from dormancy and are generally blooming before trees have put out leaves.  They have evolved to grow in this manner because they need to get the sunlight before the Oaks, Hickory, Maples and other trees put out leaves and shade the forest floor.  Bradford Pear trees rob these plants of their necessary sunlight by putting out foliage before some of these plants even emerge.  Dense colonies of the Callery Pear trees form on woodland edges, preventing native trees, and thus other woodland or native partial shade plants.  So, it is a detriment to our native bees and butterflies that don’t have many nectar options in the early Spring.

Bradford Pear trees have a very steep branch structure.  The wood is also noted for being quite brittle.  This combination makes the limbs inherently weak and at risk for falling during high winds or storms.  This can pose a serious threat to people and property.  Some municipalities have banned or are removing it from city landscaping just to avoid any liability.

Some states have listed it as an invasive species (Alabama, Georgia, New Jersey, Maryland, North Carolina, and Pennsylvania).  This is due to is prolific nature, as it has the ability to form thick stands of trees on the edge of natural forests – and thus preventing our normal, native plants from growing.

But the falling limbs from mature trees can be a real issue.  Imagine if a limb fell onto your car, or worse yet, a person!  That is too steep of a price to pay just to have a flowering tree in your yard.

There are many different native trees that are perfect for landscaping that produce lovely Spring Flowers.

Don’t miss these other articles:

Why You Should Not Build Raised Bed Gardens

How to Create Your Own Micro Prairie – Wildflower Garden 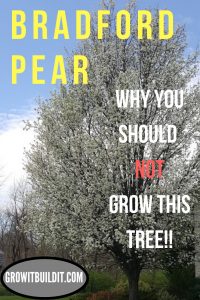 The Red Oak Tree is a deciduous hardwood tree native to Eastern North America.  Scientifically known as Quercus Rubra, a growth rate of 1-2’ per year, it can reach heights of 100’ in full...

Just because Winter is upon us doesn't mean we can just rest by a cozy fire sipping coco. No, Winter is the perfect time to perform routine gardening tasks to better prepare flowerbeds and veggie...