White Snakeroot is perennial wildflower that blooms from early Fall until a hard frost in the Eastern United States and Canada.  It can be somewhat inconspicuous as the flowers are not overly showy.  So, unless you pass a large colony of these plants in bloom you may not notice it.  But Snakeroot has a somewhat ‘weedy’ nature, as it spreads via underground rhizomes and the seed can readily germinate in disturbed soil.  Nonetheless, it provides late season food to bees and butterflies, as well as some moths.  This is a highly toxic plant to all mammals

and should not be consumed.  Milk produced from animals that have consumed this plant is also toxic to humans

.  So, whether you call this a native wildflower or weed likely depends on if you are a farmer. 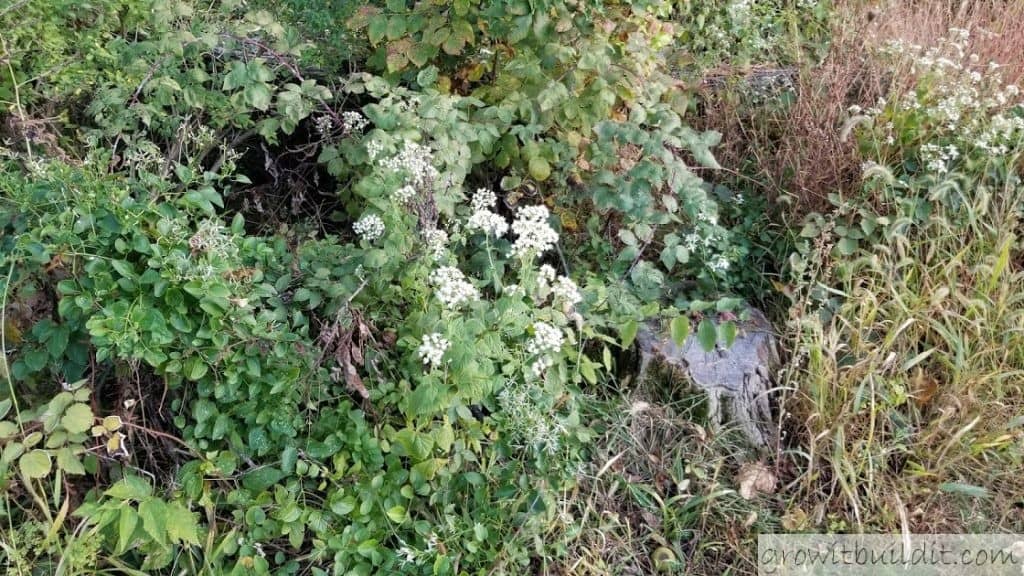 The Scientific Name of White Snakeroot is Ageratina altissima  or Eupatorium rugosum, as it was previously known.

White Snakeroot is a herbaceous perennial that will typically grow several feet tall.  However, if it is mowed or trimmed back the height can be reduced to just a foot or two.  I’ve done this along the border of a forest in my yard.  But this plant will be very inconspicuous until it blooms in September.

The stalk of White Snakeroot is light green in color, and is generally smooth.  There will be branching in the upper 1/3 of the plant, and more branching where the flower heads form.

Leaves are opposite along the stem, occurring in pairs.  The shapes The leaves can be 4-5″ long by 3″ wide near the bottom, and become smaller in size the higher they are on the stem.  On the bottom half of Snakeroot the leaves are heart-shaped, while the upper half the leaves are more lance-shaped (or similar to a Spade).  The leaves are veined and the edges are serrated. 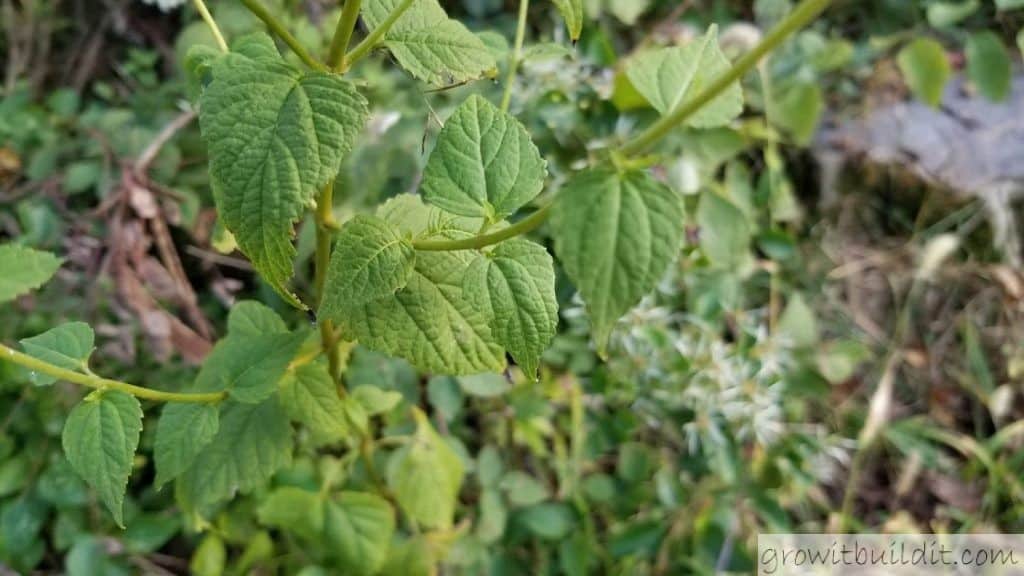 The individual blooms are 1/4″-1/2″ diameter, white in color, and very ornate when examined closely .  There are no ‘rays’ like a daisy.  Blooms are clustered in a panicle that is kind of flat headed, similar to Boneset or Wild Parsnip.

Seed heads will form in late autumn.  The seed is at the base of a small white hair, and will be spread out by the wind.  The seeds have been found to be viable for approximately 3 years 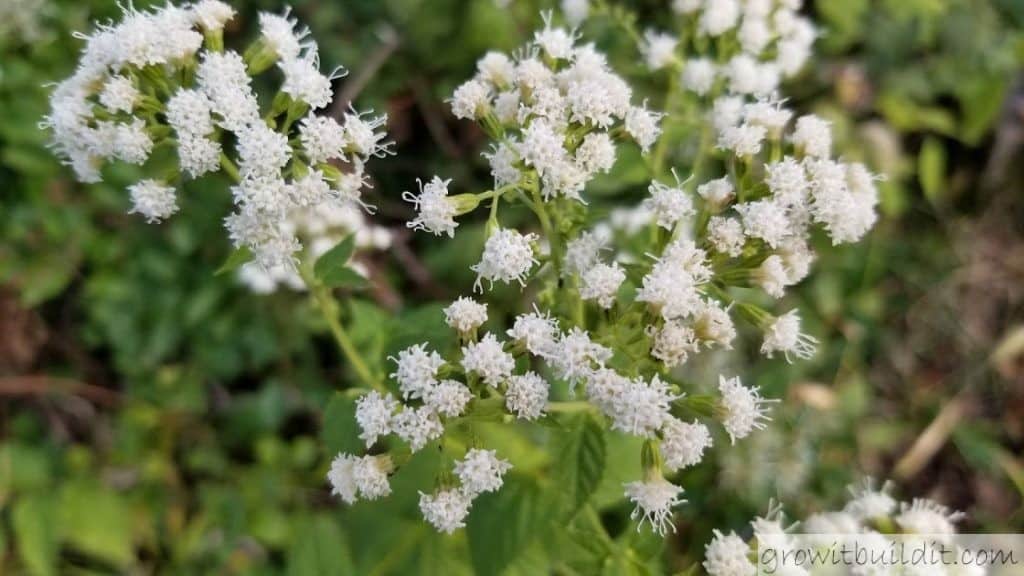 White Snakeroot has shallow fibrous roots that are rhizomes.  So, this plant can form colonies.  Particularly in disturbed areas.

In disturbed sites, white Snakeroot can be aggressive and invasive.  As it spreads by rhizomes and seed it can establish itself quickly, and colonize / take over an area.  However, in an already established area this plant will find spreading more difficult, taking several years to become a problem (in agricultural settings).

How to Control White Snakeroot?

If you graze animals, you should control White Snakeroot as it can kill your livestock, and the milk produced to kill you too.

Due to White Snakeroot having rhizome and fibrous roots, pulling established plants will not be effective as new plants will sprout from the Rhizomes readily.  Pulling young plants is effective, and you may need to do so multiple times.  Repeated mowing over a season close to the ground can effectively starve White Snakeroot of sunlight, and expand all of its energy.

. So click over there if you want to read more detail.

Where is White Snakeroot found?

White Snakeroot contains the toxic compound Tremetol and should not be consumed.  Many people used to die from drinking milk that was contaminated with tremetol.

All parts of the plant White Snakeroot are toxic due to the chemical Termetol.  Tremetol has been found to be toxic in just about every mammal that has been studied

, from humans to horses

.  Humans have historically gotten ‘milk sickness’ from consuming milk that was produced by a cow that grazed on some White Snakeroot.  Symptoms of poisoning include tremors, and losing the ability to walk.

White Snakeroot will grow best in partial shade.  I’ve found it along borders of forest, pathways in parks, and up the banks of creeks.  It generally prefers to have loam soil, or clay-loam.

For moisture, it is a ‘moderate’ plant.  It can grow in slightly moist to slightly dry conditions, making it highly adaptable for partially shaded areas.

How to care  for White Snakeroot

As a native plant, if grown in it’s preferred conditions no care will be required.

How to Establish White Snakeroot from seed

As this isn’t a plant normally sold at nurseries, you will likely have to procure some seed online.  But it is a surface sown seed that needs a couple of months of cold/moist stratification.  Therefore, if you’ve collected seed in the wild, then winter-sowing or direct sowing in the fall on a disturbed sight would be your best bet.  If direct sowing I just scatter the seed then walk over the area, as that will ensure good contact with the soil.

Due to White Snakeroot’s nature, it is not a good plant to grow in well manicured flower beds.  It is better suited to wild areas, or areas that are already somewhat established as that will provide some competition.

If you have livestock, or live near someone who has livestock, then you should not cultivate this plant.

Late season pollinators will greatly utilize this plant, as it is one of the last flowers to bloom until steady frosts set in.  So, White Snakeroot is a ecologically important plant for North America.

No significant diseases seem to affect White Snakeroot.  Most mammal herbivores will not eat this plant due to the foliage being bitter (and filled with toxins). 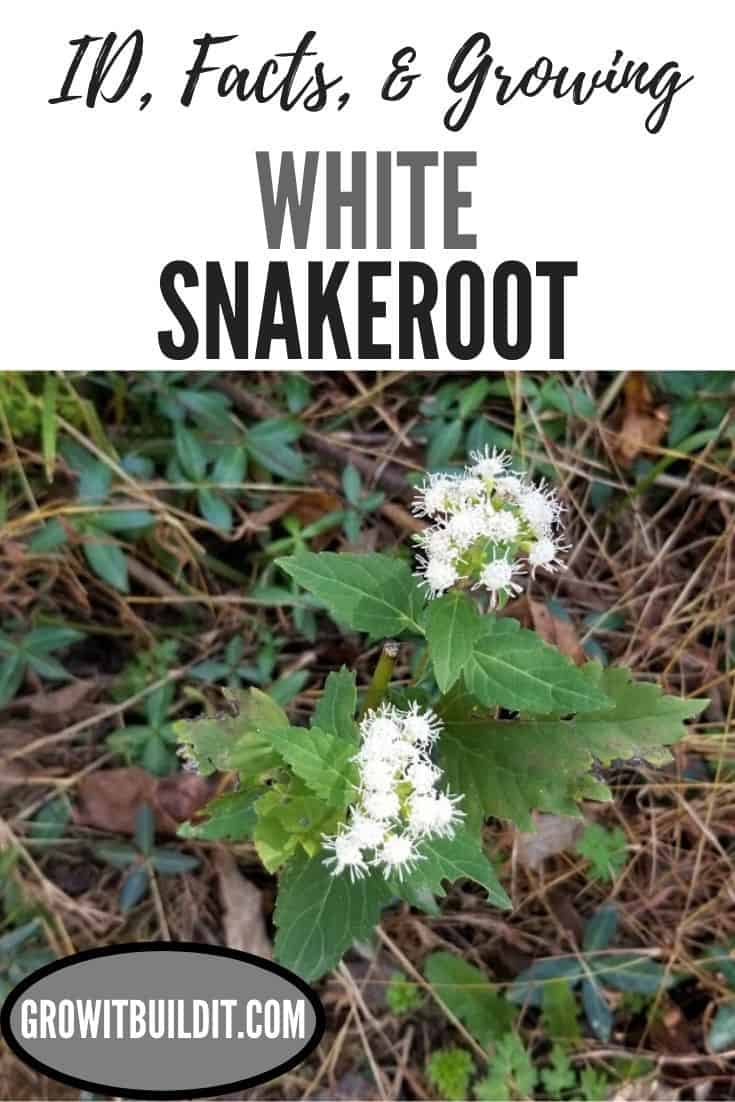 Be sure to check out these other articles, I think you would find useful, as well:

How to Remove Sod by Hand – Our Easy Method

How to Make DIY Tick Tubes

Our Simple Method to Compost

Our Easy Method to Remove Grass By Hand

Hello! You have found our illustrated guide on growing and caring for Native Sunflowers!  We love all sunflowers here but the original Native species is by far our favorite.  This is the...

Have you ever wondered what kind of soil you really have? Ever wondered where it really fell on the NRCS soil pyramid? Or are you looking to select the perfect spot for a vegetable garden, and...