Canadian Goldenrod is a herbaceous perennial wildflower native to Eastern North America that blooms in late Summer / early Fall.  It has showy yellow flowers giving roadside ditches, powerline cuts, meadows and fields a bright yellow to golden color.  It is prolific in that you rarely see a single plant, more often dozens to thousands covering abandoned fields, ditches, and other unused ground that gets full sun.  In addition to being aggressive or weedy in North America, this flower is considered invasive in other parts of the world.  Canadian Goldenrod has been documented as being invasive throughout Europe, parts of Asia, and Australia.  I have personally seen the roadsides in Southern Sweden overrun with this lovely, but thuggish wildflower. 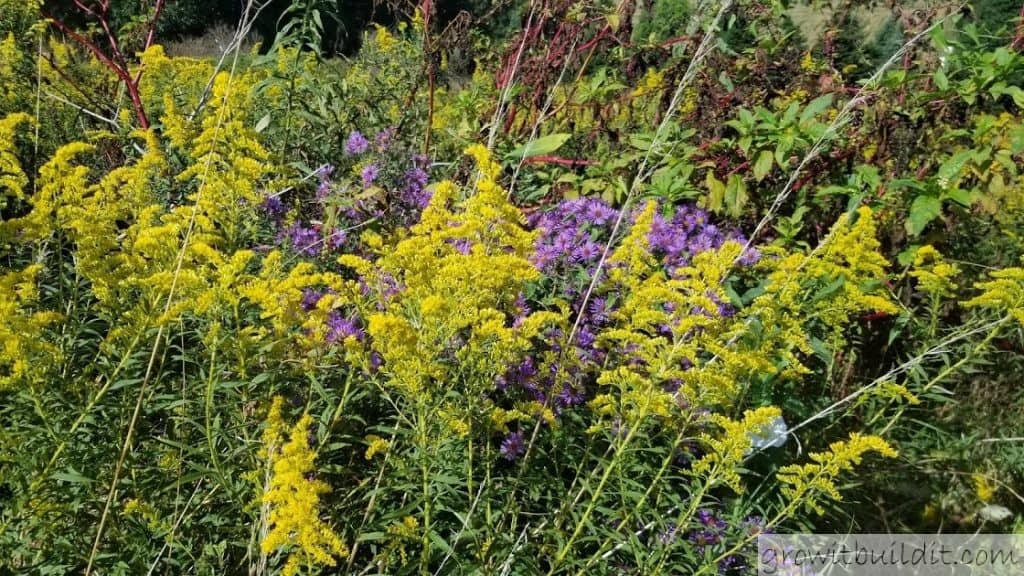 There are numerous species of Goldenrod.  And they can be somewhat tricky to differentiate.  But Canadian Goldenrod seems to be the most common one that I encounter.  I always have some volunteers in my flowerbeds – even though I have never planted any.  The closest goldenrods that I let grow are generally 10-40′ away.  So, they will self seed nearby, and from a distance!

Canadian Goldenrod typically grows about 4′ tall.  In general there will be multiple stalks arising from a central clump.  If you are finding this in the wild, or on a piece of abandoned ground or somewhere not maintained, there will likely be dozens to hundreds of plants.

The central stalk is generally green and smooth, rising 3-6′ tall.  It will not have branches except near the top, where the flowers are.

Along the main stalk there will be alternate leaves that are lanceolate or spearhead shaped.  For size, the leaves are about 3-6″ long and 1″ wide.  I’ve noticed the widest point of the leaf being in about the middle of the length.  The edges or margins of the leaf will be serrated. [1]

Individual blooms are very tiny, being only about 1/4″ (6 mm) in diameter.  The blooms will last around 2-4 weeks, at which point the flowers will begin to form seed heads.  The seed heads of Goldenrod have small feathery hairs that allow the seeds to be blown around in the wind.  It has shown that the flowering time of Canadian Goldenrod is dependent on Genetics more than environmental conditions (in regards to available moisture, etc). 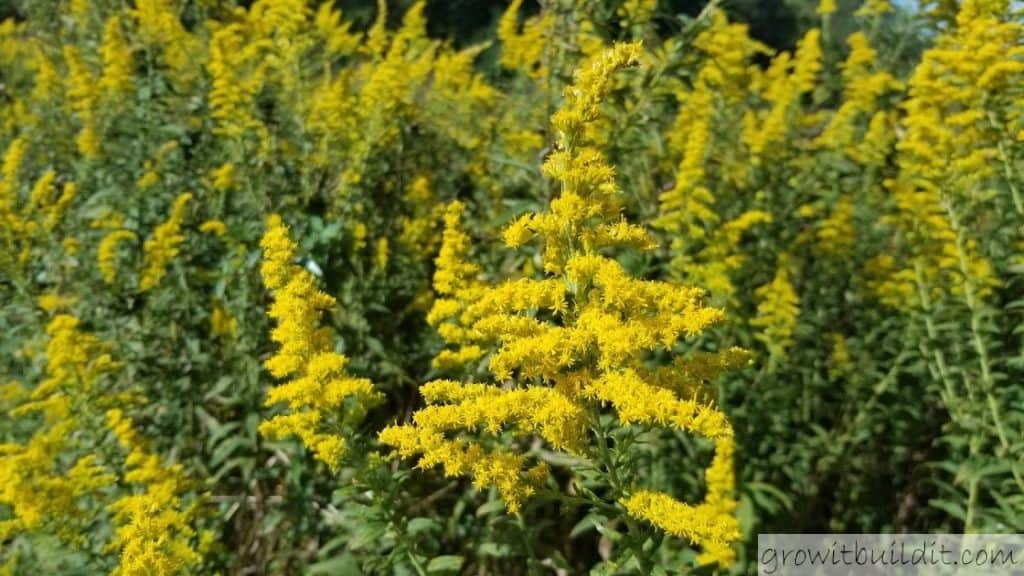 The root system of Canadian Goldenrod is a combination of fibrous roots and rhizomes.  The rhizomes serve as another way for this plant to spread, allowing it to form colonies.  These roots combined with seed dispersal by the wind and the taller nature of Goldenrod allow this plant to out-compete many other flora.  This helps explain why you see soooooo much Goldenrod in August/September/October.  It just seems to be everywhere.

Canadian Goldenrod likes full sun or partial shade.  It seems to grow in almost any soil as long as it is well drained.  The general preference seems to be medium moisture.  Although it is drought tolerant, you may see the lower leaves dry up and fall off during prolonged drought (similar to New England Aster).

The easy answer is yes, Goldenrod is an aggressive plant.  If you are dealing with a well established, thick meadow or prairie, it will not be as dominant.  But in general if there is any bare soil around this plant will find a way to fill it.  The rhizomes fill in gaps locally, and the easy seed dispersal via wind will bring new volunteers in the Spring.

In addition to being an aggressive and prolific spreader, Goldenrod may have another tool that helps it out compete certain plants.  Studies are beginning to find that there is evidence that Canadian Goldenrod (Solidago Canadensis) may release allelopathic chemicals through its roots (similar to Black Walnut trees).  Allelopathy is the process by which a plant releases a chemical that is toxic to certain plants, thus reducing competition.

This may be one of the reasons this plant is so prolific in Europe and spreading to other parts of the world.  It could also be a reason, or at least a contributing factor to why it is so prolific in America.  As we know with Juglone, the chemical secreted by Black Walnut Roots, not all of our native plants are affected by it.  Coevolution has allowed certain plants to be resistant to the alleopathic chemicals, as well as others to be susceptible (fatally) to Juglone.  The same situation has likely happened in Europe with Goldenrod, and there is a possibility that some North American plants are affected as well.

How to care for Goldenrod

This plant will require minimal to no care……if you want to cultivate it.  It likes full sun and moist soils, as long as the soil drains well.  For moisture, it can handle temporary droughts but doesn’t like wet feet.  So, don’t plant it in a rain garden and you should be ok.

It is weedy in flower beds.  It is generally resistant to most diseases.  Powdery mildew being the one that can frequently afflict Canadian Goldenrod.  Although the powdery mildew just seems to have superficial, cosmetic effects and doesn’t really harm the plant.

The primary maintenance for goldenrod is to keep it contained if growing in a backyard meadow, or flower garden.  Stalks can be cut down in the spring, as insects burrow into the stalks for the winter.  If you do wish to cut down stalks in the fall, place them somewhere where they are exposed to sunlight and stay dry.  That way any overwintering insects will be able to emerge in the Spring.

There will be numerous volunteers that sprout up, either by rhizome or seed.  If you wish to keep it controlled, cut of seed heads prior to them dispersing.  Also, you can plant it inside a pot, buried in the ground to prevent rhizome spreading.

Unlike many native flowers, Canadian Goldenrod doesn’t need a winter dormancy to germinate.  So, no cold/moist stratification is required.

To grow Goldenrod from seed, just plant seed in early spring by pressing them into the soil firmly, and lightly covering. Do this when the ground is not frozen, but still moist.  You will likely have decent germination because soil tends to stay moist in spring.  Alternatively, you can plant seed in starter pots and keep moist, in the Spring.  Grow the seedlings until they are several inches tall, then transplant out to their final location.

Even though Canadian Goldenrod has an aggressive nature, it is possible to cultivate it without having it take-over. If you bury a pot/bucket that is at least 1′ tall in your soil, possibly with the bottom cut out you should be able to grow a single specimen.  The walls of the pot should contain the rhizome growth.  Remove seed heads after flowering to prevent seed dispersal, and inevitable volunteers.

As a side note, this plant can grow quite tall.  With some species you can trim them back in June to help control the overall height.  I’ve done this with New England Aster with success (and the deer have done it for me too :)).  However, this has been researched at the University of Zurich and it was found that early season clipping did not result in a difference in the final height, but the stems were just a bit thinner.  Now, the study did it very early, as the plants were only 20 cm (~1′) tall.  So it may be possible to control the final height better if you waited until the plant grew taller initially.

Alternatively, if you have a well established backyard micro-prairie or meadow, you could plant some specimens.  But, you should watch the plants year over year to make sure they don’t take over and out-compete smaller perennials.  Smaller flowers such as Hairy Beardtongue or Butterfly Weed may have trouble if surrounded by goldenrod that steals all the sunlight or crowds them out.

The best companion plant for making a striking, showy display would have to be New England Aster.  Its dark purple flowers are nearly the same height and contrast beautifully with the yellow Goldenrod flowers.  Ironweed would also be a good companion, in that it is about the same height and also puts on a striking purple display.

Canadian Goldenrod is a very important plant for the environment and pollinators.  It provides tons of nectar for bees/butterflies as well as migrating Monarch Butterflies.  Additionally, there are tons of moth caterpillars that eat the foliage.  (Moths being the unsung pollinating heroes!)

As stated above, the only real disease that I’ve seen effect this plant is powdery mildew.  But the effects of powdery mildew on Goldenrod seem to just be cosmetic.

Rabbits don’t seem to eat Canadian Goldenrod.  I’ve not noticed any damage on the volunteers I have let grow in our backyard prairie.  I’ve read that deer will browse Goldenrod, although I have not seen any damage.

Wild Parsnip and pollinators. Credit Joshua Mayer If you've ever been cruising down the road and noticed the ditch was full of yellow flat-topped flower clusters, you may be encountering Wild...

For a showy late-blooming native flower that bridges the gap from Summer to Fall, look no further than Sneezeweed. This lovely plant makes a gorgeous yellow display that blooms after the main summer...