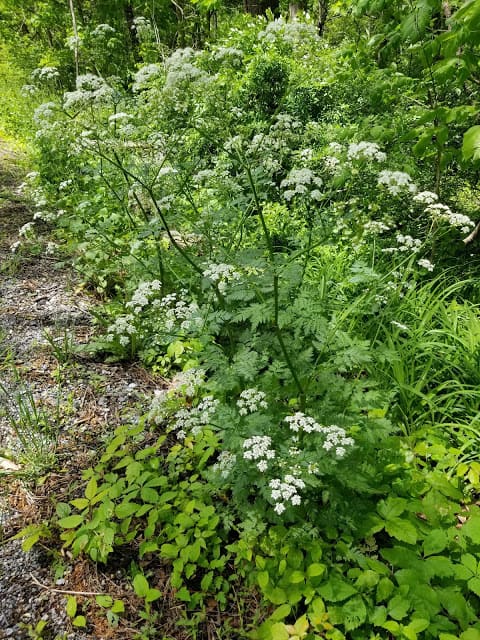 Poison Hemlock, what you may think is just a pretty, white wildflower could actually kill you.  You may have noticed ditches and fields filed with tall white blossoms in early summer.  A tall white flower that has clusters (umbels) of small white blooms that stand erect.  You may have even mistaken this for Queen Anne’s lace (another invasive plant, although far less harmful).

What you are actually seeing is Poison Hemlock (Conium maculatum), a tall flower with origins the Mediterranean Sea, Greece.  This was the plant that the ancient Greek Philosopher Socrates chose to make a tea from when he was ordered to commit suicide.  Very deadly to most mammals and humans, a small amount ingested can lead to death.  Although birds are not harmed by eating the seeds, which is why this plant spreads so prolifically.

All parts of this plant are poisonous.  Eating leaves in early Spring can be particularly poisonous.  Although, while the plant is growing, the leaves emit an odor that most animals don’t like, so they generally don’t ingest it.

The toxins contained are piperidine alkaloids, coniine, g-coniceine, and possibly others.

What does Poison Hemlock look like and how to identify it

During the second year it typically grows 6-9’ tall (2-3 m), with a 2-4’ spread.  .  Flowers are clusters of blooms (umbels), resembles Queen Anne’s Lace, and are several inches across in size.  The individual flowers are quite small, approximately 1/8” diameter (3 mm).

The leaves are very frilly, or ornate and resemble parsley leaves.  They could also be described as looking like a fern.  Leaves can be quite large, 1-1.5’ long and 1’ wide in the widest part.  The stalk will have irregular purple blotches or spots, and are hollow.  This plant has a taproot that is white, and can resemble wild parsnip or carrot.

Poison Hemlock is a biennial, Although I’ve read that it can be perennial in optimum conditions in warmer zones.  In the plants first year it will be a basal rosette of leaves approximately 12-18” diameter.  This will be hard to notice, as it will likely just blend in with other vegetation.

Poison Hemlock will grow best in full sun and moist soil.  Most references say that it prefers partial shade, but I have witnessed far too many plants growing in full sun taller than 8′ to believe them.  The ditches along the road in Pennsylvania are sometimes nothing but Hemlock.  It grows so fast that it can shade out, and crowd out our native plants.  Displacing native plants can result in reduced populations, less forage for caterpillar larva, decreasing our own local, native biodiversity.

This plant will bloom in late Spring / Early summer.  In my area of Pennsylvania (zone 6) the flowers generally bloom in early May.  After several weeks the flowers will turn into small fruits that hole a few seeds.  Then the entire plant will become brown and dry out, and remain standing tall until the following Spring.

Poison Hemlock and its invasive nature

The plant reseeds itself quite vigorously, and will make a colony.  These colonies crowd out other desirable, native plants.  Additionally, birds are unaffected by the poison, and eat the seeds. And birds are the main reason this plant is so invasive.  Once the plant has turned brown/died, the seeds will stay on top of the dried flowers throughout the winter.  This allows for a longer period of time for birds to consume/spread the seed.  The seed can also stick to people, animals, and even to cars/trucks that travel down the road.  This has facilitated the spread far and wide.

However, most seeds will fall near the mother plant.  They will germinate the following year, or for several years.  This leads to the colonizing nature of this plant.  But since the seed germinates quite easily, it makes the car/bird vector that much more effective.

If any human ingests this plant it could result in fatal poisoning.  Most often poisonings are cases of mistaken identity, such as this case where a child mistook the leaves for common parsley.  Since it has a taproot that resembles parsnip, it is also possible for poisoning from consuming the root.

Additional risks is that some people will break out into a rash upon contact with Poison Hemlock.  So, if you think you may come into contact

Livestock and other herbivore risk

Many common farm animals such as cows and sheep can be killed by ingesting this plant.  Some sources say as little as 1 pound of leaves (500 g) can be fatal.  Respiratory paralysis can occur within hours of consumption, with symptoms showing in an hour.  Pregnant livestock should not be exposed to poison hemlock, as even a small ingestion of the plant can result in serious deformities or birth defects for the offspring.

There are several methods to manage Poison Hemlock on your property or in your area.  If your method of choice may result in contact with the plant, then you should wear protective clothing.  Long pants, sleeves, gloves, hat and dust mask.  The dust mask should be used to help prevent you from accidentally inhaling fragments that can be generated (if mowing or weed eating).

If you have a small infestation or isolated plant, then you can dig the plant up and bag it in a large black trash bag.  Alternatively, you can burn the plants or use herbicide.  This is necessary since the plant is so toxic.  If you do mow, then you should hose off the underside of the mower deck.

But the main goal needs to be prevention of the plant setting seed.  So, repeated mowing or weed whacking can be effective, but you must keep up with it.

It will likely take you several years of control until the population is eradicated.  This is because there may still be seed in the soil that has yet to germinate.  So, be prepared to repeat your control methods for several years. 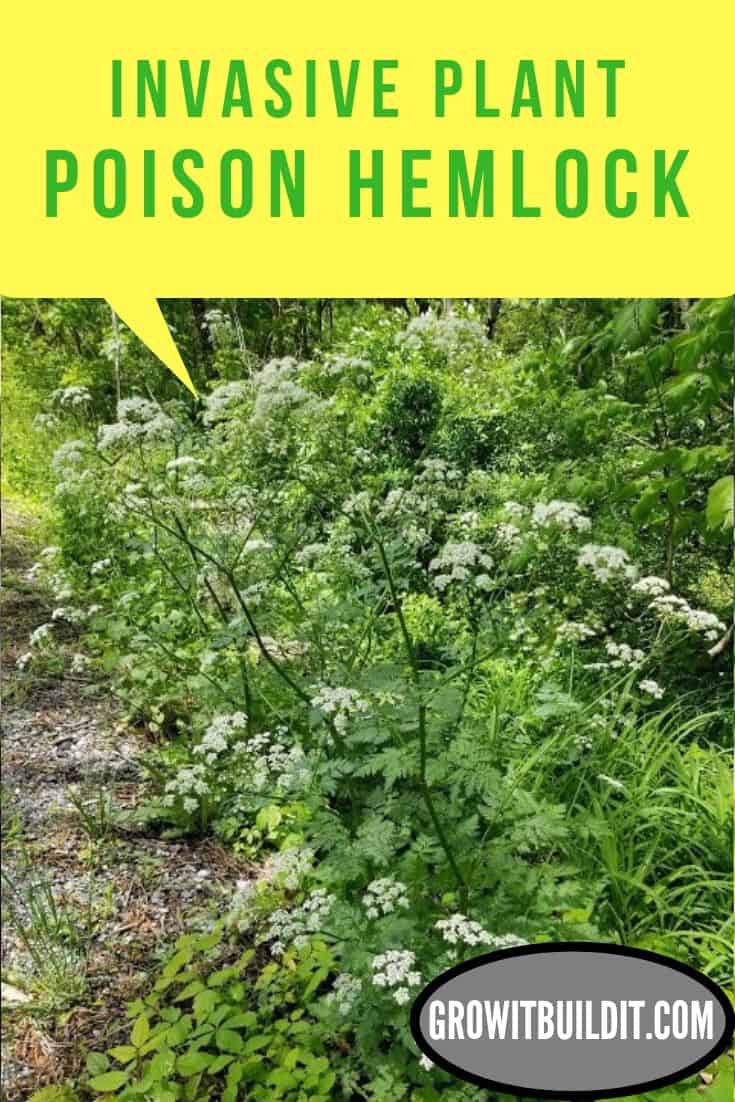