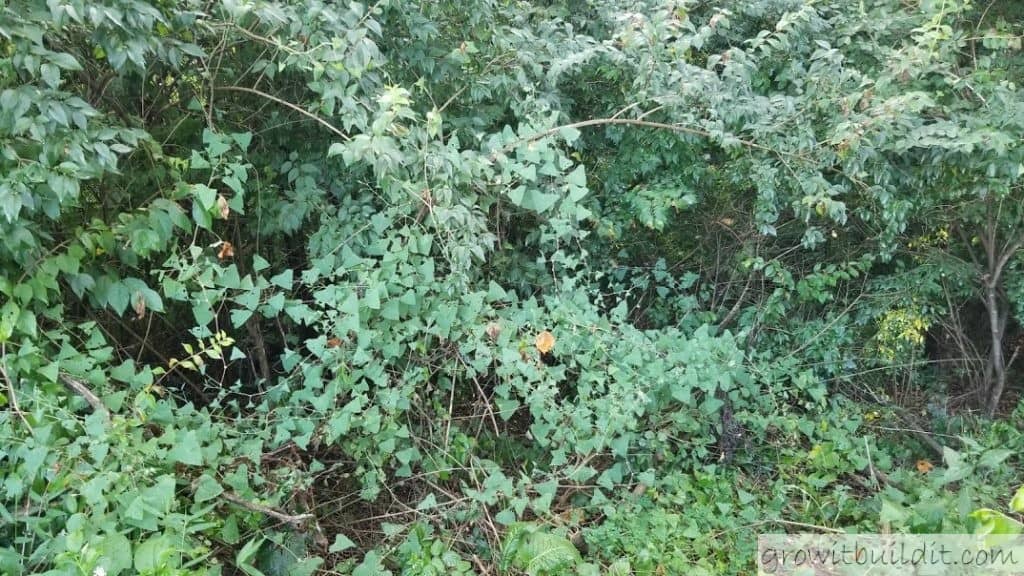 Mile-A-Minute vine is an aggressive invasive climbing vine from Asia that can shade out shrubs, trees, and other desirable plant life.  This plant is a vine that can grow 20-25’ in a single growing season in colder zones, climbing right up anything that is nearby.  This plant is self-pollinating annual that can self-seed vigorously on its own.  The seed is also spread by birds far and wide.  Interestingly, a study had found that deer are responsible for some of the spread, as many seeds have been found intact in their scat (glad I didn’t have to do that study).  The authors found that of the seeds that were in-tact, 40% of them were able to be germinated!  So, this time we can’t just blame birds for the spread of this invasive plant.

Although the common name gives you the correct impression of how aggressive this vine can be, its actual growth rate can be several inches a day in optimum conditions in mid-summer.

The Scientific Name of Mile-A-Minute Vine is Persicaria perfoliata

Persicaria perfoliate has alternate leaves that are triangle shaped.  In fact, the ‘triangles’ are nearly equilateral and have no lobes, so are quite easy to identify.  The leaves are light green in color, and grow on the vine which can be reddish in color.

The stem also will have small thorns/hooks that are pointing downwards, and will prick you if you pull it without gloves.

Also along the stem are these small circular shaped leaves called ocreass.  These appear along the stem every several inches, and contain flowers underneath.  The flowers may never open, but will self-pollinate eventually producing fruits that are blue.  In late summer/fall the fruits will mature and contain a seed that is black/red.

Later in the year the berries will form and begin to ripen.  The thorns will also become much more pronounced.  And you will have no doubt as to why this plant is also called ‘Asiatic Tear-Thumb’!

The origins of this plant arriving in North America seem to indicate that its first known location was a nursery in York County Pennsylvania sometime in the 1930’s.  It may have been brought in in error, but the plant was not eliminated.  It then naturalized itself, and has spread nearly nationwide ever since.

This is one of the reasons that we always say you should plant natives!  If you have a few minutes, you can read about our reasons for supporting native plants at the link below;

Native Plants – How and Why they help the environment

You have several options to control mile-a-minute vine.  Namely mechanical, chemical, and biological.  The key point is that you need to do this prior to seeds ripening.  So, earlier is better.  Once a few of these vines set seed on or near your property, you will be faced with several years of controlling it until it is eradicated.  I’ve read that the seed is viable for around 6 years or so, so that is a long time to be on the lookout for new seedlings.

Because of its shallow root system, it is pretty easy to pull the vines, especially when young.  Several weeks after germination though the small thorns/barbs on the plant will harden and will then hurt your hand when pulling.  So, at that point you should just grab a pair of leather gloves for protection.  Still, I find pulling pretty easy.

Any general weed killer will work on this plant, but spraying can be difficult to do without damaging desirable plants.  This plant likes full sun, so if there are other plants (natives, good guys) around to shade it you will get some beneficial control.

There are several biological controls that have been researched.  One of the more successful methods is a weevil (Rhinocominus latipes Korotyaev) that will eat the leaves and bore into the stem.  While this weevil doesn’t completely defoliate the plant, it will stunt its growth.  The stunting of the growth can cause it to delay it making seeds, and kill it in some cases.  The key is that there needs to be other plants present, as these will then be able to out-compete the mile-a-minute vine.  Without the sun, the plant won’t do as well, and will make fewer seeds, or die from lack of sunlight.

The University of Delaware has done extensive research on this weevil and its success for controlling this invasive plant.  If you want to read more, check out their study here.

Now, these weevils haven’t been released en-mass as of yet, as they still need to determine what second order effects could come from releasing them.  Remember the story of the lady who swallowed a fly?  Yeah, me too. 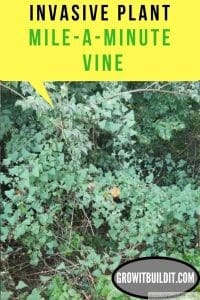 link to Composting Egg Cartons - What you NEED to know

Eggs are one of the most consumed foods in North America, and that also means that we generate a lot of egg cartons. While recycling items is always preferable to throwing things away, the best...

If you are interested in incorporating native plants into your gardening, but don't know where to start, you have come to the right place! This is a beginners guide to start a Native Plant Garden. ...