Amur Honeysuckle is a short fast growing, flowering shrub that has become invasive and established in roughly half of the United States and Canada.  As it can grow upwards 25-30′ tall by 20′ wide, it is highly adaptable to temperate climates.  Originally from Eastern Asia, in the late 1800’s it was brought to the United States for use as an ornamental. It took little time to escape gardens and spread into the wild, and reeking havoc on the local ecosystem in sites where it became established.

Our feathered friends and other mammals will consume the berries, and spread them in their fecal matter far and wide as they roam.  This plant can rapidly colonize disturbed areas, creating a thick canopy that will block out the sun for any other native plants.  Amur Honeysuckle can form single monocultures, meaning no other trees/shrubs/plants will be present.  Garlic Mustard (another invasive species) is about the only other plant I’ve seen that can grow underneath it.  In fact, if Garlic Mustard is also present you can almost have a situation where the land is nearly 100% covered with non-native plants.  Amur Honeysuckle will out-grow and out compete almost all native plants.  Therefore I’ve been battling this plant for several years since relocating, and I still have years worth of plants that I need to kill. 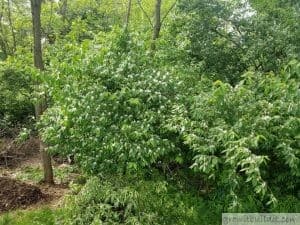 It hold leaves longer than any other plant

That is one of the biggest problems with this plant.  It will leaf out before any other plant/tree in the Spring, and make its sunlight-stealing canopy.  So this plant This prevents woodland ephemeral plants from getting any sunlight, such as Virginia Blue Bells, Spring Beauty, or Wild Violets.  These woodland wildflowers bloom so early because that is their time to get sun, before the native trees leaf out.  So these shade perennial wildflowers miss their short window of sunlight because of this invasive thug.

Lonicera maackii is the scientific name of Amur Honeysuckle

The overall shape of a mature plant is like a multi-trunk umbrella.  The trunk will rise, but the branches will arc down under the weight of the wood/leaves and to get maximum sunlight.

These branches are FAST growing.  If you break off most of a branch, but leave some left, it can grow a new 3′ long branch in six weeks.  The growth rate is crazy.

The bark has veins/ridges that run parallel to the trunk.  The branches that hold leaves will be hollow in the middle.  There are native honeysuckles, but they do not have hollow stems.  So you can use this information to better confirm identification.

The leaves can be about 3″ long, and shaped like a long tear-drop.  They are opposite and will be in a perfect symmetrical pattern along most of the stem. 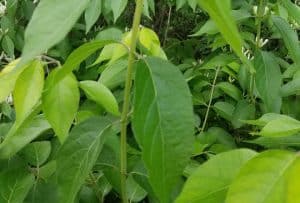 The flower of Amur Honeysuckle are tubular and approximately 1″ long.  There will be several per origin of leaves.  They will first be white and then become yellow.  Eventually they fall off, and a small cluster of 1-4 berries will form.  The berries are somewhat poisonous to humans and should not be consumed. 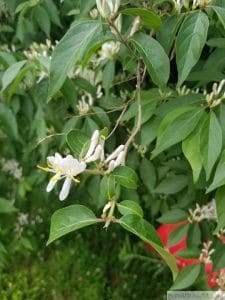 The berries of Amur Honeysuckle are poisonous to humans.  Eating them can cause rapid heartbeat, vomiting, diarrhea and should not be consumed.

The roots are taproots that will be reddish orange in color.  They spread out from a central root.

Don’t maintain it – kill it.

The flowers are pollinated by bees and hummingbirds.  Being able to draw hummingbirds is about the only positive thing I can say about this plant.  I have often seen deer browse the foliage, but apparently it doesn’t taste that good to them because they never completely defoliate the plant (like the often do with saplings of oak, apple, maple). 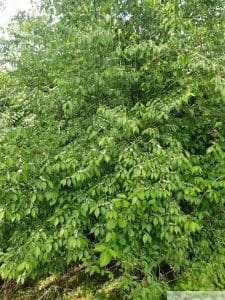 I have never seen any stress from disease on this plant.  It just seems to power through and thrive anywhere it can steal a bit of sunlight.

How to Control and get rid of Amur Honeysuckle

Young saplings that are only 3′ tall (1 m) or less can be pulled out of the ground if the soil is moist.  Loosening the soil a bit with a shovel or digging bar also helps.  That is the easiest and quickest way to stop or stall an infestation.  The method for mature plants will also work, but pulling is much less harmful.

You should really just  go to our guide that details the best way to kill mature stands of Bush Honeysuckle.

I’ve seen other references that suggest using Glyphosate (round up) to control Amur Honeysuckle.  With all the recent news linking too much Glyphosate to cancer, I will give you an alternative that is effective and doesn’t involve spraying.

To kill a mature shrub, what I do is cut it off at the base.  Depending on the size, this could involve removing many branches, brush clearing, etc.  But once you get to the main trunk, you just cut it off as low as you can.  I have used chain saws or hand saws for this.  The result is the same, but one just requires a bit more effort. 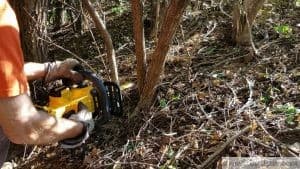 Once you have the bare trunk, apply concentrate brush killer directly to the trunk.  Do this within 30 minutes of cutting it so that the chemical is most effective.  The product I use is called BioAdvanced Brush Killer.  It is usually on sale at Amazon for less than $20.  Click this link to see if it is still on sale.  Depending on how quick you apply the brush killer concentrate, as well as the size of the plant you may have to recut and reapply in the Spring.  But this stuff works.  Below are some pics of stumps I killed the previous Spring. 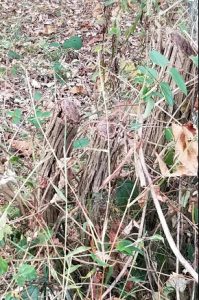 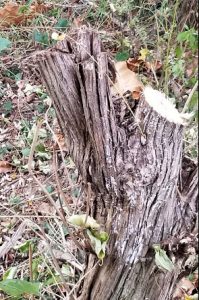 I made a short youtube video on how I do this that you can watch below (it’s less than 90 seconds). 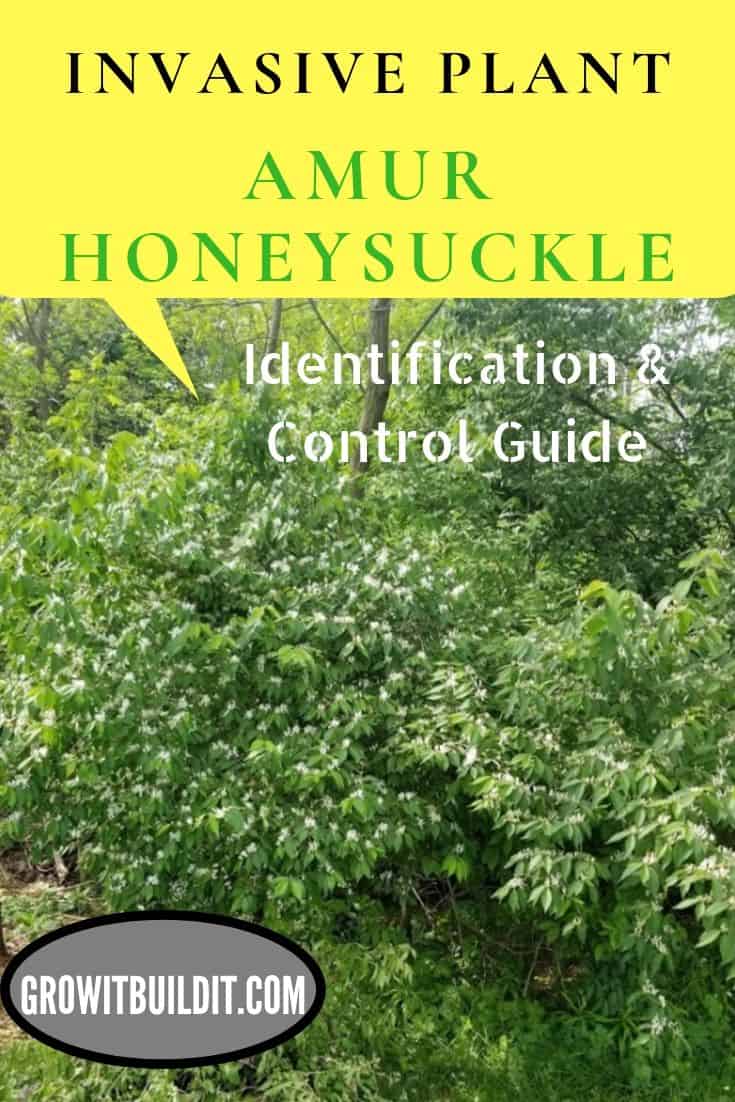 Be sure to check out these other articles, I think you would find useful, as well:

How to Remove Sod by Hand – Our Easy Method

How to Make DIY Tick Tubes

Our Simple Method to Compost

Our Easy Method to Remove Grass By Hand